For Flow’s coding tutorials and examples, see Getting Started .

Flow is a decentralized platform built to support the next generation of games, apps, and the digital assets that power them.

Decentralized systems introduce new opportunities for consumers and developers, including:

Cadence is a new, easy-to-use programming language designed for this new paradigm.

To understand how to write programs in Cadence, you need to first understand how Flow organizes its on-chain code and how users and applications interact with that code.

The programming model in Flow is centered around accounts and transactions. Each user of Flow, whether a real person, or a server in a data center, is represented by an account in Flow that is controlled by one or more private keys.

All persistent state and its interfaces (the ways to interact with it) are stored in accounts. This means that if you want to run a program on Flow, you first have to store it in your account. (This differs from Ethereum, where users deploy code to separate accounts from the one they control). You or other users can interact with your account's code by importing your account’s "API" and calling public functions from that "API" from a transaction.

Transactions are blocks of code that call functions on accounts in the network, perform arbitrary actions, and read data. Transactions have to be cryptographically signed by a Flow user and therefore have special permissions unique to the user that signed it, like accessing the private code that is stored in the signer's account. It is important to understand that transactions are the only way to initiate any state changes in an account. The code stored in an account can call other accounts' code, but that call has to have been initiated by a transaction sent by a user. 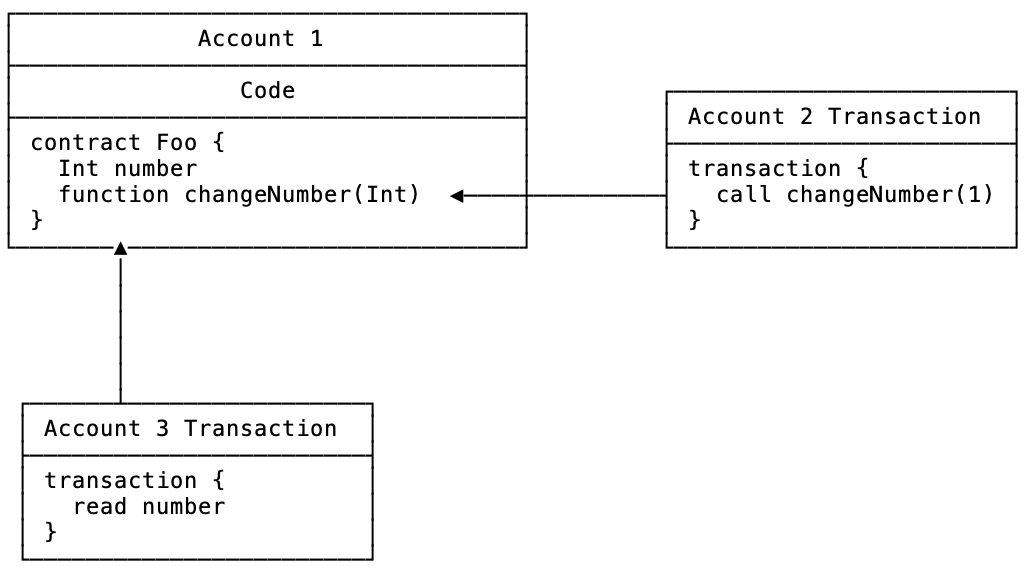 Cadence is a resource-oriented programming language that introduces new features to smart contract programming that help developers ensure that their code is safe, secure, clear, and approachable. Some of these features are:

Swift and Rust inspire Cadence’s syntax. Its use of resource types maps well to that of Move, the programming language being developed by the Libra team.

Other languages pioneered smart contract development, but they lack in areas that affect the long-term viability of next-generation applications.

Safety is the reliability of a smart contract to perform its function as intended. It is heavily influenced by the unchangeable-once-deployed nature of smart contracts: developers have to avoid introducing any potentially catastrophic weaknesses before releasing a smart contract. For example, in 2016, an overlooked vulnerability in the DAO code saw millions of dollars siphoned from a smart contract, eventually leading to a fork in Ethereum and two separate active blockchains (Ethereum and Ethereum Classic).

Bug fixes are only possible if a smart contract is designed to support changes, a feature that introduces complexity and security issues. Lengthy auditing and review processes can ensure a bug-free smart contract. Still, they add substantial time to the already time-consuming task of getting the smart contract’s core logic working correctly.

Overlooked mistakes cause the most damaging scenarios. It is easy to lose or duplicate monetary value or assets because existing languages don’t check relevant invariants or make it harder to express them. For example, a plain number represents a transferred amount that can be accidentally (or maliciously) multiplied or ignored.

Some languages also express behaviors that developers tend to forget about. For example, a fixed-range type might express monetary value, without considerations for a potential overflow or underflow. In Solidity, an overflow causes the value to wrap around, as shown here. Solidity also allows contracts to declare variables without initializing them. If the developer forgets to add an initialization somewhere, and then tries to read the variable somewhere else in the code expecting it to be a specific value, issues will occur.

Cadence is type safe and has a strong static type system, which prevents important classes of erroneous or undesirable program behavior at compile-time (i.e., before the program is run on-chain). Types are checked statically and are not implicitly converted. Cadence also improves the safety of programs by preventing arithmetic underflow and overflow, introduces optionals to make nil-cases explicit, and always requires variables to be initialized. This helps ensure the behavior of these smart contracts is apparent and not dependent on context.

Security, in combination with safety, ensures the successful execution of a smart contract over time by preventing unsanctioned access and guaranteeing that only authorized actions can be performed in the protocol. In some languages, functions are public by default, creating vulnerabilities that allow malicious users to find attack vectors. Cadence utilizes capability-based security, which allows the type system to enforce access control based on rules that users and developers have control over.

Security is a consideration when interacting with other smart contracts. Any external call potentially allows malicious code to be executed. For example, in Solidity, when the called function signature does not match any of the available ones, it triggers Solidity’s fallback functions. These functions can be used in malicious ways. Language features such as multiple inheritances and overloading or dispatch can also make it difficult to determine which code is invoked.

In Cadence, the safety and security of programs are enhanced by Design By Contract and Ownership Primitives. Design by contract allows developers to state pre-conditions and post-conditions for functions and interfaces in a declarative manner so that callers can be certain about the behavior of called code. Ownership primitives are inspired by linear types and increase safety when working with assets. They ensure that valuable assets are, for example, not accidentally or maliciously lost or duplicated.

Implicitness, context-dependability, and expressiveness are language-based challenges that developers often encounter. They affect the clarity (i.e. the readability of code and the ability to determine its intended function) and the approachability (i.e. the ability to interpret or write code) of the language and the programs built using it. For example, in Solidity, storage must be implemented in a low-level key-value manner, which obfuscates the developer’s intentions. Syntax confusion is another example, with “=+” being legal syntax leading to an assignment instead of a probably-intended increment. Solidity also has features with uncommon behaviors that can lead to unintended results. Multiple inheritance may lead to unexpected behaviours in the program, and testing and auditing the code is unlikely to identify this issue.

The Ethereum blockchain’s code immutability showcases the need for considerations around extensibility and mechanisms that allow ad-hoc fixes. Trail of Bits details the Ethereum’s current upgrade strategies and their issues: Developers using the ‘data separation’ approach to upgradability may run into problems with the complexity of data structures, while developers using ‘delegatecall-based proxies` may run into problems with the consistency of memory layouts. Either way, these challenges compromise approachability and overall extensibility.

Cadence improves the clarity and extensibility of programs by utilizing interfaces to allow extensibility, code reuse, and interoperability between contracts. Cadence modules also have configurable and transparent upgradeability built-in to enable projects to test and iterate before making their code immutable.

Cadence allows the use of argument labels to describe the meaning of function arguments. It also provides a rich standard library with useful data structures (e.g., dictionaries, sets) and data types for common use cases, like fixed-point arithmetic, which helps when working with currencies.

Most smart contract languages currently use a ledger-style approach to record ownership, where an asset is stored in the smart contract as an entry in a central ledger, and this ledger is the source of truth around asset ownership. There are many disadvantages to this design, especially when it comes to tracking the ownership of multiple assets belonging to a single account. To find out all of the assets that an account owns, you would have to enumerate all the possible smart contracts that could potentially include this account and search to see if the account owns these assets.

In a resource-oriented language like Cadence, resources directly tie an asset to the account that owns it by saving the resource in the account’s storage. As a result, ownership isn’t centralized in a single, central smart contract’s storage. Instead, each account owns and stores its own assets, and the assets can be transferred freely between accounts without the need for arbitration by a central smart contract.

Resources are inspired by linear types and increase safety when working with assets, which often have real, intrinsic value. Resources, as enforced by Cadence’s type system, ensure that assets are correctly manipulated and not abused.

The special status of Resource objects must be enforced by the runtime; if they were just a compiler abstraction it would be easy for malicious code to break the value guarantees.

Resources change how assets are used in a programming environment to better resemble assets in the real world. Users store their currencies and assets in their own account, in their own wallet storage, and they can do with them as they wish. Users can define custom logic and structures for resources that give them flexibility with how they are stored. Additionally, because everyone stores their own assets, the calculation and charging of state rent is fair and balanced across all users in the network.

Currently, Cadence is an interpreted language, as opposed to a compiled language. This means that there is no Cadence Assembly, bytecode, compiler, or Cadence VM.

The structure of the language lends itself well to compilation (for example, static typing), but using an interpreter for the first version allows us to refine the language features more quickly as we define them.

Getting Started with Cadence

Now that you've learned about the goals and design of Cadence and Flow, you're ready to get started with the Flow emulator and tools! Go to the Getting Started page to work through language fundamentals and tutorials.